The Beginner’s Guide to Bolts of Assembly Hardware

So what are the different types of assembly hardware?

There’s also three factors to consider when determining what type of assemble hardware to use:

Length- based on the thickness of the joining parts, as well as considerations for your nut, washer and locking mechanism.

Diameter- needs to be able to withstand the load and strength requirements of the connection, and is also generally based on ASCE and AISC requirements.

Chemistry- a commonly used bolt is ASTM A325, but it’s important to keep in mind that there are two types of A325 bolts.

Other common specifications for bolts include A394 and A193-B7.

ASTM A394, also known as tower bolts, are lower in strength than A325, which is high strength bolts, and are commonly used in lattice towers. ASTM A325 has a longer shank and only about 2 inches of threading, compared to A394, which is threaded the length of the bolt. You can reference Part 7 of the AISC Steel Construction Manual for additional details.

There are two strength requirements that go into bolted connection design:

Tensile Strength- resistance to forces applied through the longitudinal axis of the bolt.

Yield Strength- when the bolt starts to deform 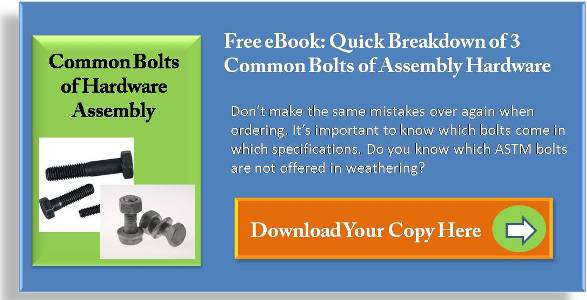